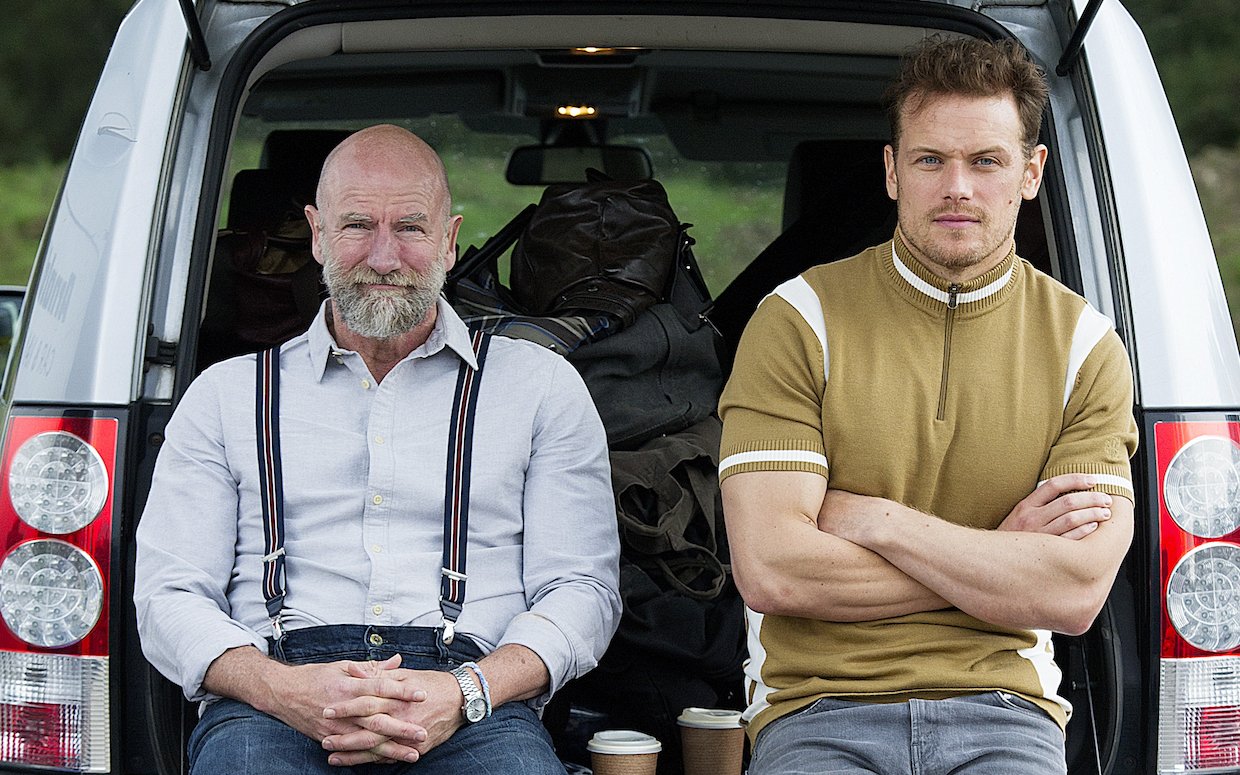 I hope you guys are hanging in there during this dreadful Droughtlander. The release of Season 5 on Blu-ray and DVD this week was a nice little shower to settle the dust, and let me tell you, if you did not get the Blu-ray, you are missing out! There are a TON of deleted scenes on there that gave me #allthefeels! It was a bit of a double-edged sword though, since it also broke my heart those scenes didn’t make the final cut. But I digress… There is still no word on the start of filming for season 6 of Outlander. However, several shows have resumed filming in the UK including projects like A Discovery of Witches. Production news is few and far between, but based on the scraps of evidence social media has provided, I expect filming will start in October some time.

So, in lieu of a cliff notes history lesson this week, I wanted to do a piece I’m dubbing “In Other News”. The cast of Outlander has been busy lately, despite the hold on filming,  and I’m going to run down the list of goings on for your Outlander obsessed convenience. Enjoy!!

Dynamic Scotttish Duo Sam Heughan and Graham McTavish set out in the summer of 2019 to explore Scotland’s industry, scenery, and history while documenting their experiences in a podcast that would be called “Clan Lands”. Somewhere along the way cameras were added into the mix, and their fun little idea exploded into a STARZ original series: “Men In Kilts” and an international book deal for Clan Lands: Whisky, Warfare, and a Scottish Adventure Like No Other!

Any details about the STARZ show are being held close to the vest, but Heughan and McTavish were seen doing pick-ups over the course of several weeks at the end of August, and a Teaser Trailer was released back in June to promote the show which promises to be a fun and educational docuseries about the history and traditions of Scotland.

No release date has been announced for the series, but with the advent of COVID-19, my guess is they are reserving Men In Kilts for this winter when a variety of new entertainment will be scarce. Considering STARZ originally planned to release season 6 of Outlander somewhere around March of 2021, they are in dire need of premium entertainment. The Spanish Princess premiers October 11, 2020, and I expect we will see Clan Lands air after The Spanish Princess concludes around the start of the new year.

On a more definitive front, Clan Lands: Whisky, Warfare, and a Scottish Adventure Like No Other has a confirmed release date of 03 November 2020 in the US and UK. It is available for preorder so make sure you snag a copy! With a foreward by Diana Gabaldon, it promises to be a delightful tale written by Sam and Graham that includes their adventures in Scotland, a little bit of history, and loads of fun stories about their lives including a few Outlander anecdotes to soothe our weary souls.

Clan Lands will also be available on Audible, 03 November, and will be narrated by the authors themselves. You can pre-order your audio version now, and it will magically appear on your listening device after its release!

Tim Downie and David Berry take on the world of Outlander with a hilarious twist in their new podcast: Outcasts. From Executive Producer Meril Davis, to Casting Director Suzanne Smith, to show stars and producers Caitriona Balfe and Sam Heughan, Tim and David take on a new guest each week in a rip-roaring good time, sure to give you a good ab workout. Their last episode releases this Sunday (20 September)–and we’re all a bit sad to see the show come to an end. It is an EXCELLENT way to fill your time during droughtlander, and here’s hoping they decide to take on a second season!

Here Is The Beehive

After season 5 of Outlander, show star Caitriona Balfe seems to be enjoying her Producer hat. So much so, that she, along with Ocean Independent, have optioned the rights to Sarah Crossan’s book Here Is The Beehive which released in August 2020 in the UK, and is scheduled for a November release in the US by publisher Little, Brown. Time and schedule permitting, Cait intends to star in and produce the adaptation of Crossan’s novel.

According to Deadline, Here Is The Beehive “…centers around Ana and Connor, who have been having an affair for three years. In hotel rooms and coffee shops, swiftly deleted texts and secretly captured weekends, they have built an insular world focused on one another. Peeling away the layers of two overlapping marriages, the book is a devastating excavation about risk, obsession and loss.”

Any project Caitriona attaches herself to seems to be a winner, so I am extremely looking forward to getting my hands on this one. Remember, November 2020 release in the US. Mark your calendars!

Sir Kenneth Branagh has written and will direct Caitriona Balfe’s newest acting project, Belfast. The film is a semi-autobiographical peace centered in the world of 1960s and 70s Belfast, Ireland, where Branagh was born and raised. The triple threat writer, director, and actor is well known for projects such as Hamlet, Dunkirk, and Murder on the Orient Express, and was awarded the Freedom of Belfast in 2018. His newest project, Artemis Fowl, is streaming on Disney+ now

Cait and Fifty Shades of Grey actor Jamie Dornan have been cast to play Branagh’s parents while heavy hitters Judy Dench and Ciaran Hinds are filling the roles of Branagh’s grandparents. Filming is reported to have already begun in England, but plans to continue filming in Northern Ireland later this year are in the works as well.

Back in July the news dropped that Sam Heughan would be starring alongside the likes of Constance Wu, Freida Pinto, Sope Dirisu, and Oliver Jackson-Cohen to bring Suzanne Allain’s novel Mr. Malcolm’s List to the big screen. Set in the same era as popular film subjects like Pride and Prejudice, Mr. Malcolm’s List promises to put a fun twist on your typical “meet cute”.

According to an article in Vanity Fair, the adaptation “follows Julia (Wu), a society lady jilted by London’s most eligible bachelor Mr. Malcolm (Dirisu), when she fails to meet one of the items on his list of requirements for a bride. Feeling shunned and humiliated, she enlists her friend Selina (Pinto) to help her take revenge on Mr. Malcolm by tricking him into thinking he has found his perfect match. The plan appears to be working when Henry (Heughan) threatens Julia’s scheme by courting Selina for himself. Their scheme is further upended by the meddling of the bumbling Lord Cassidy (Jackson-Cohen).”

If you can’t wait to sink your teeth into this delicious project, the short and sweet Mr. Malcolm’s List (only 258 pages) is available wherever you purchase books — including Audible.

Author Suzanne Allain will write the screenplay, short film director Emma Holly Jones will make her feature length directing debut, and actresses Wu and Pinto are producing the project. The movie is due to film in Ireland in 2021 with a theatrical release date projected for sometime in 2022.

One Reply to “In Other News…”